Have you ever had a hard time figuring out what to get for a friend or family member who is a Disney freak?

Try getting them Disney collectors stamps. There have been several designs throughout the past. I have the site listed below of where you can order some of the new ones.

NOW FOR THE PRESENT STAMPS

The New Marvel Collection
$18.50
With these 20 colorful stamps, the U.S. Postal Service salutes stars from the world of Marvel Comics. For decades, Super Heroes have been synonymous with the comic book medium. Their adventures have provided an escape from every day life
and demonstrate that individuals can make a difference. Comic books aren't simply "kid stuff"—adults have always been among their readers, and the form has attracted its share of serious artists and writers. And Super Heroes have responded to social
and political issues from their beginnings.

The other 10 stamps depict individual Marvel Comic book covers. Information about the artwork shown on each stamp appears on the back on the stamp pane. 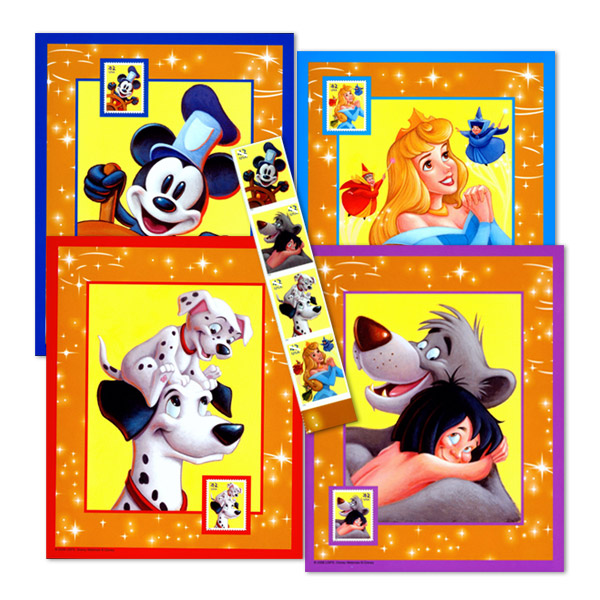 The New Disney Stamps
$14.95
This is a set of four 8 x 10 inch frame–worthy prints featuring artwork from the 42–cent The Art of Disney: Imagination stamps, plus one each of all four stamps nestled in a matching portfolio. The prints feature enlarged stamp artwork surrounded by a fairy dust border and include placeholders to affix the matching stamps.

On August 7, 2008, at Disneyland Resort, in Anaheim, California, the Postal Service™ issued 42–cent The Art of Disney: Imagination commemorative stamps in four designs. The stamps were designed by David Pacheco of Burbank, California.

With the help of some of Walt Disney’s famous characters, these four stamps illustrate the theme of imagination. U.S. Postal Service® art director Terrence McCaffrey joined with a design team that included artist Peter Emmerich and creative director David Pacheco to create four stamps that feature Mickey Mouse as Steamboat Willie; Princess Aurora and her helpers Flora, Fauna, and Merryweather from Sleeping Beauty; Pongo and one of his pups from 101 Dalmatians; and Mowgli and Baloo from The Jungle Book.

This is the fifth stamp pane honoring the art of Disney to be issued by the Postal Service. The first, issued in 2004, was on the theme of Friendship. The second, issued in 2005, focused on Celebrations. The third, issued in 2006 was on Romance and the fourth, issued in 2007, was Magic.