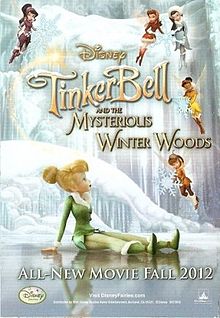 As you may know, Tinker Bell and the Mysterious Winter Woods is an upcoming computer animated film. It is based on the Disney Fairies franchise and produced by DisneyToon Studios. It is to be the final movie in the series of the four films starring Tinker Bell. The DVD was set to be released into stores in the winter of 2011. It was just announced, however, that the DVD will now be released during CHRISTMAS 2012. So, sorry to all of you who were anticipating it; Disney wants the DVD to follow the release of the game Tinker Bell and the Pixie Hollow Games.

Reply Abilfessy
6:59 AM on July 4, 2022
tadalafil tadora 20 tadalafil and sildenafil taken together https://tadalafilise.com/

Reply JtbnAbura
1:33 PM on June 6, 2022
can you buy viagra over the counter in australia where can i buy viagra pills https://viagranameed.com/